Kandle has been on quite the rollercoaster ride since starting a band as a teenager, but sometimes stereotypes are true. “Welcome to the music business,” she laughs, having become fairly accustomed to the highs and lows it has thrown her way. From a sparkling new-artist frenzy and tours across Europe to the shackles of corporate contracts and being broker than broke, she now embarks on a new and wholly independent path choosing to turn her exploitative experiences within the industry into fuel for her creative fire. The singer-songwriter from British Columbia sees her admission of struggle as a powerful showcase of resilience rather than a nod to defeat. Clearly she prefers not to demure from difficult subjects, instead choosing to commune with her darkness through a honeyed vibrato and distorted electric guitars. Honesty is Kandle’s strength as a songwriter.

She was a self-confessed late bloomer, but as a child was moved by the musical environment she was immersed in. Growing up as the daughter of Neil Osborne (54-40) provided Kandle with a unique lens, spending much of her formative years backstage at gigs and hanging out in recording studios. “It was so exciting and inspiring to me, especially being in the studio. I felt completely at home there. It was a playground for sound. You could do anything.” But at first she kept her budding creations to herself, staying in the background learning to play guitar, writing poetry and songs.

Kandle cut her teeth in music as part of The Blue Violets, a band she formed with her sister Coral and friend Louise Burns, former Lillix member. Here, she started learning the nuance of live performance and artistic collaboration. “I loved writing the songs and playing guitar in the shadows. I was fine there,” she says, “but then they both went on to do other things and I wondered if I could try and do it alone.”

Daunted but driven, Kandle worked meticulously on her first fully-formed work, but being born with a musical lineage was starting to feel like more of a hurdle than a help. She says no one took her seriously, almost as though she was just a kid playing dress up. Her family ties are strong and her relationship with her father is so fulfilling (they even have a band together “A Family Curse”), she shares, but it seemed that the industry wasn’t willing to see her in a fresh light. So she packed up and moved across the country to Montreal where nobody knew who she was. Like a music industry fairy tale, after posting her songs on Facebook, she suddenly had multiple record deal offers and her self-titled debut EP was released in 2012 to critical acclaim. She quickly found herself on the brink of becoming Canada’s next rising star. Her shimmering mezzo-soprano paired with her haunting melodies and unique tales of darkness were connecting with an expansive audience.

As her career gained incredible momentum, Kandle released her debut record, In Flames, which was an instant success and went on to gain a Juno nomination and win a Prism Prize Award. Simultaneously, her public profile grew as she graced magazine covers and played huge festivals. ‘ In Flames’ tackled serious, urgent issues of mental health, disordered eating, sexual assault, and more, over grandiose, self-assured production. She appeared to be a poster child for female empowerment but the chasm between her image and the truth in her lyrics was only growing. Running parallel to her outward success, behind the scenes found Kandle fighting bad contracts, fearing toxic and manipulative work dynamics and pushing herself to the brink all while living out a real-life starving artist cliche.

Never idle, Kandle found her way to a new label as her song Demon climbed to #1 and she started work on her next album. But it wasn’t the path she’d hoped for, in fact this is where she ultimately felt her most confined. Her music was kept locked away for years, being worked and reworked as the momentum she had built all but stalled out. Much of this dark period she is sadly legally not allowed to speak about. ‘Holy Smoke’ got its release but Kandle’s mental health took a dive. She found herself formless, moving through an industry uncertain if she belonged, adding more trauma to a life that had already had too much of it. Music had been her escape from damaging early life experiences and now she felt lost there too.

“Once I became a free artist and had to deal with all the messy business and all my trauma alone, I just started falling apart. I lost all my confidence and couldn’t believe in myself anymore. For about six months I was convinced I couldn’t even sing. I thought I’d never sing again,” Kandle says.

Despite her hopelessness, she held onto her songs. “Nothing else mattered beyond making music,” Kandle kept writing to keep her sanity, “even if no one ever heard it, I had to do it for myself.” She was nomadic and homeless for months, wandering aimless through London, Berlin, LA and Toronto, slowly rebuilding her independence as she crashed on friends’ couches. It was these friends and peers who buoyed her heavy spirit. “They all made music with me, just for fun with no expectations of money or even a release.” They created for the most authentic reason, human connection. It kept her going as the legal battle for her autonomy raged on.

Possibly more prolific in darkness than in light, Kandle soon found herself with a collection of songs she was genuinely excited about, each one created with a different collaborator in a different city. As her legal troubles were wrapping up, Kandle decided it was time to try releasing her music completely on her own terms. Very fitting for an EP that traces her journey of reclaiming her artistry and forging a new footprint of independence. Stick Around And Find Out was released in 2020 to great excitement and glowing reviews. She brings a soulful performance to every word, channeling over a decade of touring the globe and collaborating with some of Canada’s finest songwriters, such as Sam Roberts, Coeur de pirate, Peter Dremanis (July Talk), Devon Portielje (Half Moon Run), Martin “Youth” Glover and more,

You can feel her leaning into her most formative influences, “I”m obviously a sucker for all 60’s music,” she laughs, “especially girl-groups like the Shangri-Las and strong female leads like Eartha Kitt, Sarah Vaughan, Shirley Bassey, and Nina Simone.” Kandle combines this with a clear adoration for alternative rockers like PJ Harvey, the Cure, Jack White (who she is also connected to having starred as a 007-level assassin in his acclaimed Corporation video) and current chart topping retro kindred spirits Lana Del Rey, Angel Olsen and Sharon Van Etten. She is no longer the ingenue, she commands her place on stage and in the studio with a clear vision and ambitious nature.

Now, with a brand new full-length record, Set The Fire, Kandle is alight, redefining her past through song. She is a singular voice and the musical world is ready to hear what she has to say. The first singles have already exceeded expectations and have found her as one of the first independent female artists on the cover of Spotify’s “Ready to Rock” playlist and the buzz and excitement around Kandle’s work seems to have returned! Her Bond-inspired masterpiece for Lock and Load was nominated for a Canadian Independent Video Award, and her brilliant twisted take on Honey Trap is a visual masterpiece featuring the extremely talented actor Keenan Tracey (Bates Motel, The 100) alongside her all-female band The Wiccs. And she’s just getting started.

“This is the most empowered state I’ve ever been in. So much of my music has been very victimized—I’ve been through a lot. I was really dark and angry, and my writing reflected that,” she says. With Set The Fire, Kandle emerges from a new place of strength. “I’m trying to set the fire myself rather than be burned by it.” The recording sessions served to amplify that personal growth as producer Michael Rendall, Kandle says, took all her ideas and instincts seriously, encouraging her to trust her own vast musical knowledge, enabling her to produce vulnerable work as they tag teamed engineering and producing duties quarantined in the studio last March. Recorded at Hipposonic Studios in Vancouver BC, a city where her family lineage is well known, she felt uplifted instead of weighed down. Her dad was there just for fun, alongside trustworthy cohorts Rendall, Nik Pesut, Dave “Rave” Ogilvie and Dave Genn. To capture that sixties sonic essence she called in her good friends and powerhouse women Louise Burns, Debra-Jean Creelman and Kendel Carson to sing the bg’s around a single vintage mic. She wanted the album to feel bold and alive, the way she does.

Every past trauma or unlucky experience is an integral part of Kandle’s story but so are her triumphs and the dedication she has to her art. Set The Fire is a visceral portrait of a journey to reclaim one’s power after being broken, of rediscovering innate strengths and the confidence that comes with it. As Kandle sings on Long Night Moon, “I shall rise, calm and clear eyed, from a nightmare, a prayer and a dream.” The fire is burning and Kandle holds the match. 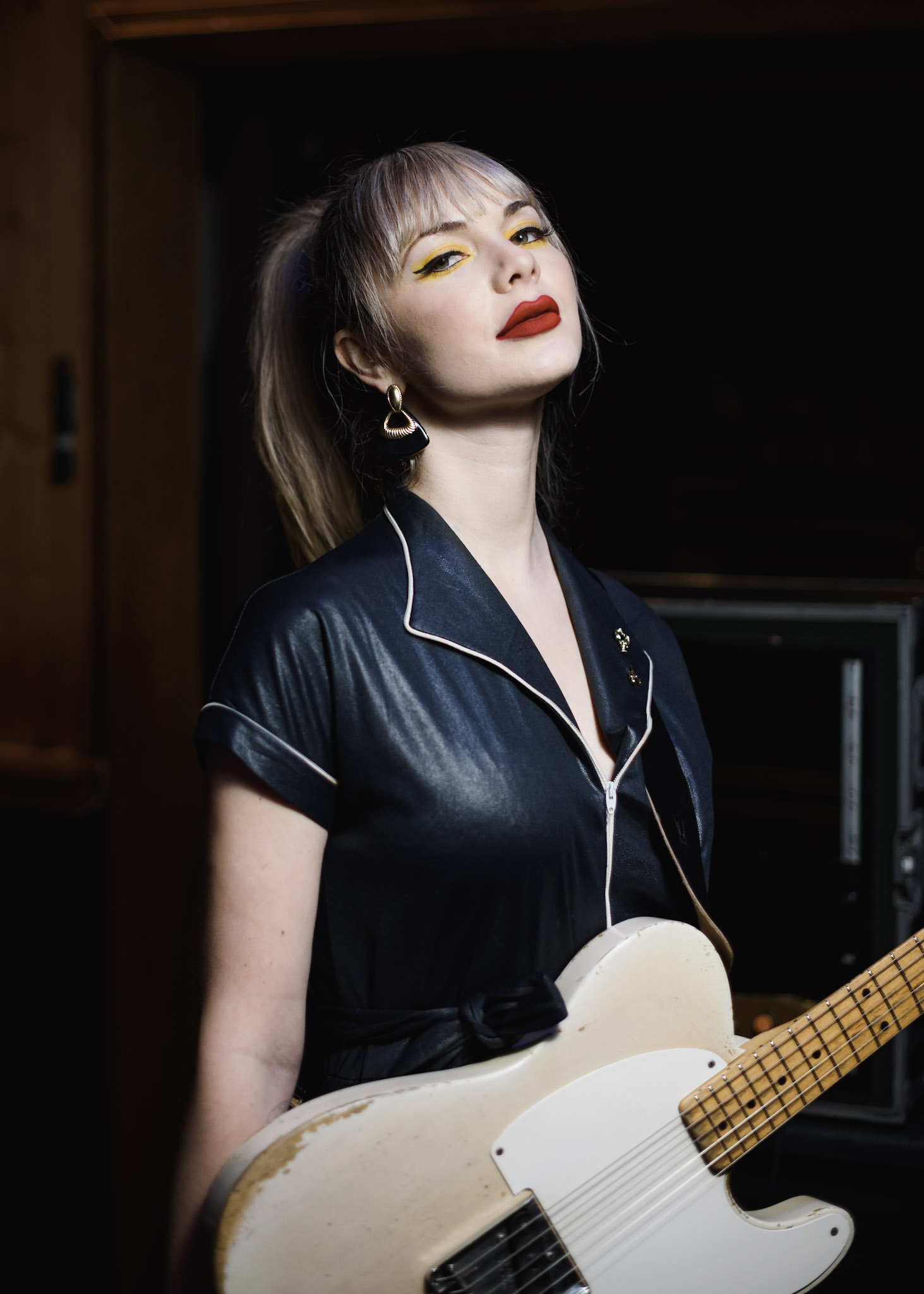 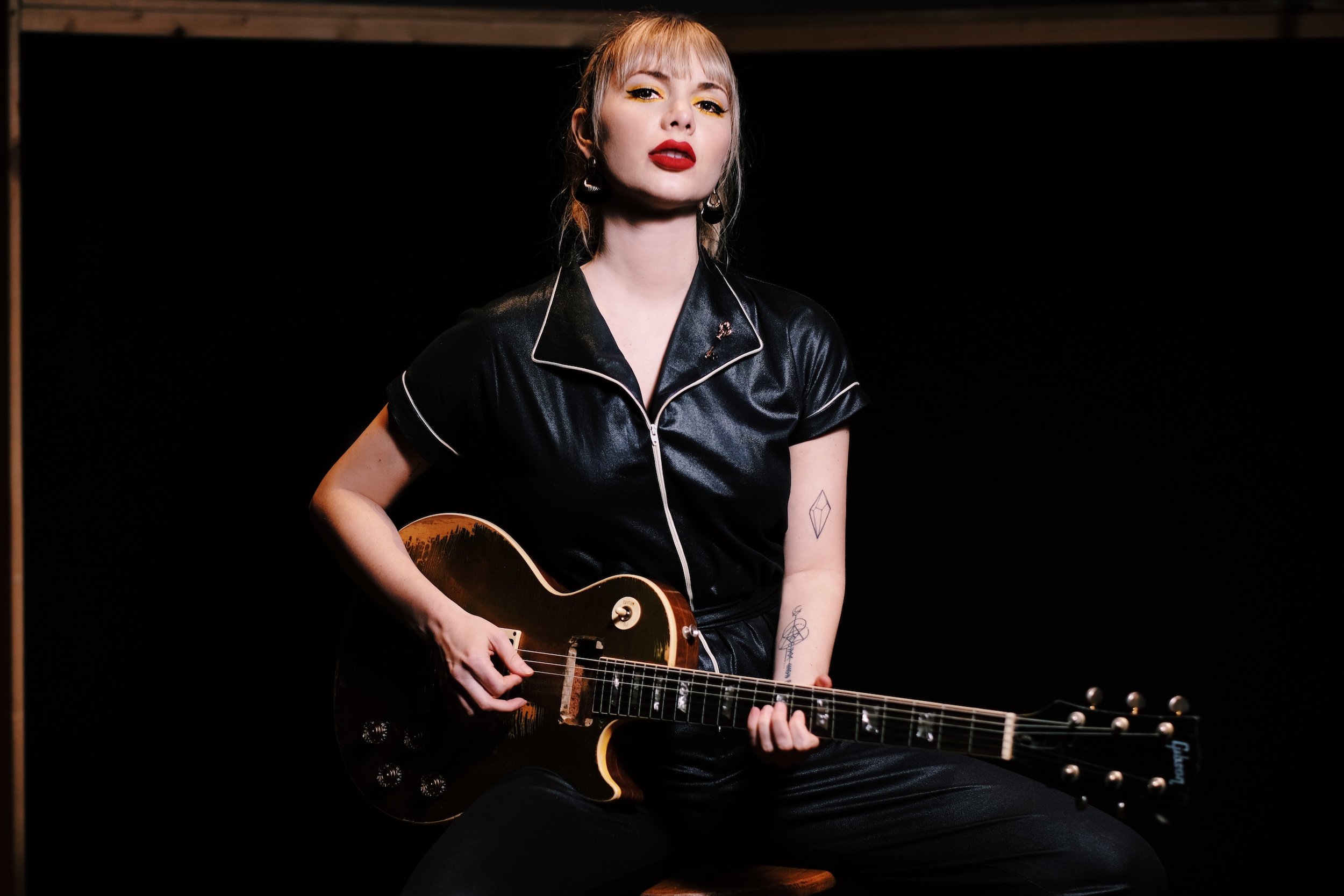 BC born singer-songwriter Kandle Osborne is catharsis personified. Embodying equal parts cabaret chanteuse and ambitious rock singer, she’s covered everything in her inky blues-influenced songs from heartbreak, sexual assault, chronic illness and a loss of power, providing an immense release for her listeners with her treacle dipped voice.

Kandle Offers Track-by-Track Of New EP, ‘Stick Around and Find Out’ to American Songwriter

After years battling through the infamously cold and stark music industry and finally escaping the shackles of recording contracts, Kandle suddenly found herself in full control of her music.

Packed full of cutting edge, passion, and a sense of unwavering power and authority, ‘Better Man’ is a dynamic and memorable piece of art from Kandle Osborne, known simply as Kandle. The track tackles the issue of having to cut ties with someone entrusting with helping your career, and the artist masterfully turns her feelings […]

Kandle pulls no punches with her new single ‘Better Man’. This track is how she puts her experiences in the music industry into words, specifically those where she was manipulated by someone she’d entrusted with her career. The track is a bit more energetic than some of her other music, but that fuels the defiant, […]