Rishi Dhir writes what he knows. In Elephant Stone, the modern psych-pop band he has helmed for the past 13 years, Dhir has woven stories of loss and grief, existential crisis and rebirth, and a world withering away all set to elegant, intense droning music. What Dhir knows—and something so many of us can relate to over the past two years—is presented with such clarity on Elephant Stone’s latest, Le voyage de M. Lonely dans la lune.

The EP, set for release on February 18, 2022, is sung entirely in French, a departure for the English-speaking band. The record is what Dhir calls a “love letter to Montreal, Quebec, and all of our French-speaking fans around the world.” While Dhir, a first generation Indian immigrant with very strong cultural ties to the motherland, was born and raised in Montreal, he’s always had a strong connection with French-speaking friends and fans.

M. Lonely is, as Dhir explains, thematically connected to the band’s last record, Hollow. On Hollow, a conceptual record that features a vocal appearance from Dhir’s daughter, Elephant Stone confronts the questions around a dying earth and how humanity can survive that. Recently, Dhir told CJLO that Hollow featured clear narratives, with side A focusing on the storyline of actual destruction and side B heavily leaning into how people in the story could live through such a moment. M. Lonely picks up the personal aspects of survival, and what that means with or without people.

Of course, Dhir was deeply influenced by pandemic lockdowns—with an entire world in real crisis.

“I built this story line about a hermit named M. Lonely who is very content in his solitary world until a world event happens that causes everyone else to stay home as well… sound familiar?” Dhir says. “He sees this as a mockery of him and his choices, deciding instead to build a rocket ship to the moon to be left alone,” Dhir explains. Unravelling over the course of four songs with raucous hooks and voltaic synths on first two tracks, and lonely, soft melodies on the last two, M. Lonely, Dhir says, “ultimately realizes he was happier back on imperfect Earth with all of its imperfect people.”

The EP came together over the course of the pandemic, with Dhir working with Miles Dupire on drums, Jason Kent on keys, and guitar, and Robbie MacArthur on guitar. Dhir began the project by writing out melodies, different chords, and scribbling out messy lyrics. He noticed, then, that the intonations and few “gibberish words,” as he called it, were in French. From there, Dhir’s friend and fellow musician, Félix Dyotte, helped finesse the record into French entirely. M. Lonely was, as an ironic benefit of the pandemic, mixed at Dhir’s home studio, Sacred Sounds, a new skill he happily picked up after being in the industry for over two decades.

Elephant Stone was born out of a need for refuge for Dhir. After playing in bands such as The Datsons and High Dial in the late 90s, Dhir was burnt out by the rigorous demand of touring. Dhir admits this period led him to a crisis of identity—unsure of what to do next, if his work mattered, and trying, through all that darkness, to reignite his passion for playing music. He picked up the sitar in 1997, an act that would influence the next phase of his career.

In the mid-2000s, as he told CJLO recently, Dhir and his wife experienced loss through a miscarriage. That experience, as well as his time spent in India with his wife, influenced The Seven Seas, Elephant Stone’s debut record in 2009, which would be critically acclaimed and long-listed for the Polaris Prize. This began Dhir’s relationship to writing about the personal, bringing in the sitar, and carving out a niche in the modern psych-rock genre by infusing it with some pop sensibilities.

Elephant Stone’s self-titled sophomore record, released in 2013, would clarify the band’s sound to Dhir, and to their fans. At that time, he felt a sturdiness in the work being produced, saying that of their entire discography, this is the record that is the most Elephant Stone sound. From there, the band released The Three Poisons in 2014. Written at the end of 2013, The Three Poisons serves as a beginning pivot for the band. It quite honestly references death and rebirth, the cycles of life, through Buddhist principles. It was the first record of the bunch to get remixed, deconstructing the sound and restitching it back together into something new.

In 2016, Elephant Stone released Ship of Fools, their most synth-pop, danceable record to date by embedding in more modern aural textures into the work. While they are arguably one of the most important groups in their genre in the Montreal rock scene, Ship of Fools exemplifies the beauty of reaching out and beyond genre—experimenting with playful sound over something quite dark. That sampling contemporaries like Daft Punk or even legends like Isaac Hayes to see what comes to the fore makes for interesting work. On Ship of Fools, brooding doesn’t have to exactly sound as angst-heavy as it may feel.

Elephant Stone has been praised by the likes of NPR, Brooklyn Vegan, Consequence of Sound, Rolling Stone, Clash Magazine and more. As a highly-regarded sitar player, Dhir has also collaborated with indie-rock icons (Beck) and legendary cult bands (The Brian Jonestown Massacre). As Dhir looks back on 13 years of this project, in a decades plus career in the Montreal rock scene and beyond, he has a deep appreciation for the life that exists around and with him. That taking one’s time and finding footing in a world they are excited by is a crucial lesson to carry.

Dhir’s journey with music, in and out of Elephant Stone, was wrought with trying to find a place that fit him until he decided that what he made was worth sharing in the space that he could carve out for himself. The best kind of music, and the stories paired with those sounds, often begin with that internal excavation.

”I only write about what I know and think I understand. As long as there’s Rishi, there’s going to be Elephant Stone.” 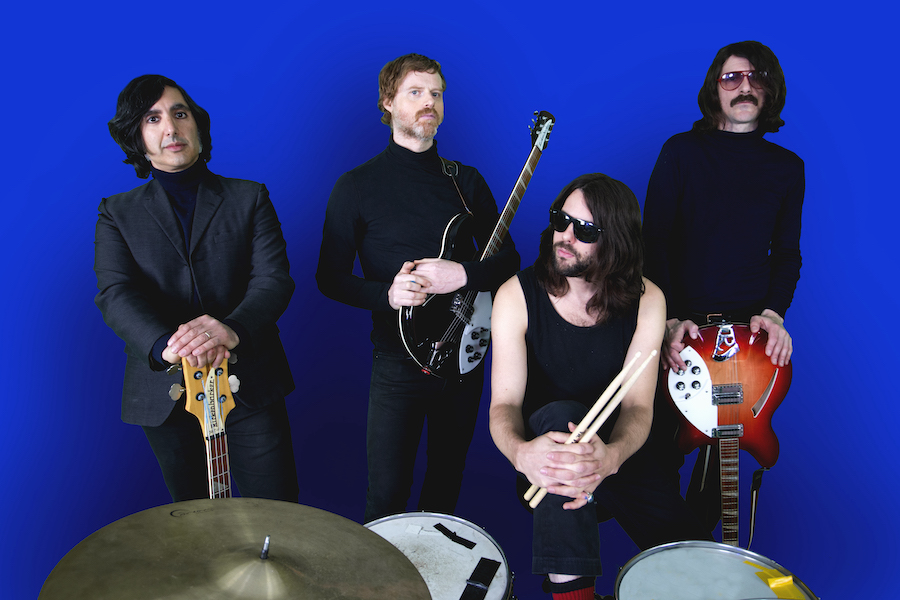 “The renditions found on ‘Remix of Fools’ intensify the moments of infectious rhythm, highlight the swirling atmospherics, amplify the hidden hooks, and take the songs into unexpected and uncharted territory.”

The video for Xavier Boyer’s remix of Elephant Stone is Video Of The Week at The Violet Wave.

Elephant Stone announcing dates in UK, head to DrunkenWerewolf for the full details!

Here Comes The Flood has the details on Elephant Stone’s European wing of their upcoming international tour!

New Elephant Stone video for ‘Photograph’ is up on Ride the Tempo. Look for them in Ontario this February!

The Spill Magazine caught Elephant Stone & The Velveteins in Vancouver. Read the review!

Elephant Stone bringing some much needed hope with their new video for ‘See the Light’.

Big congrats to Elephant Stone for having the #1 song on CBC Music’s R3-30 this week!

Elephant Stone’s ‘Manipulator’ single up in the Top-5 of CBC Music’s R3-30 this week!

9/10 review for the new Elephant Stone album ‘Ship of Fools at Exclaim!!

Big congrats to Elephant Stone on their new record release! Out today!

New Elephant Stone video is up on PureGrainAudio.com.

New album ‘Ship Of Fools’ out this Friday!

Elephant Stone is up on CBC Music’s R3-30 this week!

Check out the new Elephant Stone single ‘Manipulator’ as part of The Revue’s Weekend Showcase.

Check out today’s edition of The Matinee at The Revue and hear to new Elephant Stone along with a bunch of great tracks!

When The Horn Blows has some thoughts on ‘Manipulator’ the new single by Elephant Stone!

Heard the latest from Elephant Stone? Well, it’s one of 102.1 the Edge’s Top-5 Gems this week, listen loud!

New Elephant Stone is part of Week In Pop at Impose!

Listen to the latest Elephant Stone single ‘Manipulator’ at The Music Manual.

Check out the latest single from Elephant Stone at Bucket Full of Nails!