Sham (noun).
1: A trick that deludes. Hoax.
(eg. He feared that the deal was a sham.)
2: Cheap falseness. Hypocrisy.
(eg., as per Oscar Wilde: I saw through the hollowness, the sham, the silliness of the empty pageant.)
3: An ornamental covering for a pillow.
4: An imitation or counterfeit purporting to be genuine.
5: A person who shams.
(Merriam-Webster, edited)

Family (noun).
1: The basic unit in society, traditionally consisting of two parents rearing their children, or of various social units differing from, but
regarded as equivalent to, the traditional family.
2: A group of individuals living under one roof and usually under one head. Household.
3: A group of persons of common ancestry, a clan; a people or group of peoples regarded as deriving from a common stock.
4: A group of people united by certain convictions or a common affiliation, a fellowship; the staff of a high official (such as the
President).
5: A group of things related by common characteristics, such as: a closely related series of elements or chemical compounds; a group
of soils with similar chemical and physical properties; a group of related languages descended from a single ancestral language.
6: A group of related plants or animals forming a category ranking above a genus and below an order and usually comprising several
to many genera.
7: A set of curves or surfaces whose equations differ only in parameters.
8: A unit of a crime syndicate (such as the Mafia) operating within a geographical area.
(Merriam-Webster, edited)

Sham Family (band).
1: Your new favourite thing from Toronto.
2: Sword of punk-rock righteousness.
3: Loud in all the right directions.
4: Pure-heartedly ambitious in several other “right” directions you haven’t thought of yet.
(Benjamin Rayner, rambling enthusiastically)

Alright, maybe that whole dictionary bit went on a little longer than it should have.

Anyway, this Sham Family EP is fantastic. Good on the quartet’s Toronto homeboys Born Ruffians for making it the first non-Ruffians release on their suddenly extra-intriguing Wavy Haze Records imprint. But, moreover, good on frontman Kory Ross for finally steppin’ up and doing something concrete with the “hundreds and hundreds of demos” – the handful of them that lived long enough to pass muster as Sham Family songs worthy of inclusion on this record, anyway – he’s been stockpiling in the shadows.

“This project has always kind of been my baby that I was always working on because I always needed to be working on some sort of music when I wasn’t working in other bands, and it’s gone through so many stages of its life,” says Ross. “It started as just a four-track cassette-recorder wall-of-noise shoegaze project. Then it was gonna be this industrial-noise side-project thing that I just could not wait to unleash upon the world.”

“But I’ve never wanted to be a frontman. I’ve always been a kind of anxious dude and being a guitar player was fine. I could just turn my back to the crowd and be the hired gun – and even then I remember playing a show in Ottawa where I had to lay down onstage because I was having a panic attack – but finally after I had 300 or 400 demos backed up I was, like, ‘I have to do something with this stuff. I have to.’ I’ve created so much music. So it’s nice being out in front and being able to convey what I’ve had pent up for so many years.”

He had a readymade band right in front of him. Ross has been making music with drummer Zachary Cockburn and bassist Jason Brum since they were metalcore-lovin’ suburban high schoolers, while he’s known guitarist Cole Sefton since he was a member of a previous Toronto group – a band in which Ross and Cockburn also briefly played, notes Sefton, “before we just imploded and quit” – and, thus, they predictably clicked right away as the nascent Sham Family when they first assembled about three years ago. And yet there were still a couple of false starts.

“We had one practice and we were all, like, ‘This is sick!'” laughs Sefton. “And then we just stopped for
a year.”

Eventually, the quartet picked up where it left off, started rehearsing regularly and went into a studio and laid down four tracks for what was to be its debut EP.

“We were building up to get our big release going on and we played one basement show for a bunch of high-school kids just losing it in Barrie. That was supposed to be the first of many,” says Ross. “We were just gonna go for it and 2020 was going to be our year. And then COVID-19 hit.”

The forced break that followed proved to be a blessing in disguise, as it gave Sham Family time to take a second look at its material and conclude “Okay, we can do better.” And so they kept labouring away in their practice space to “hone in on this thing and just kind of perfect what we want to do,” eventually scrapping all but one of the tunes from that first studio session – the scorching, Fugazi-esque noise-rock teardown “Spitting Image” – in favour of an entirely new four-cut slab of agit-punk fury recorded by themselves (three of the four members studied engineering at Fanshawe College) that they were even more “super-hyped” to put out. Rather than drop Sham Family, the EP, on deaf ears during the pandemic, however, they’ve resisted the urge to release it until now, when there’s a little light (maybe) appearing at the end of the pandemic tunnel. And if you think these songs rip as more or less “live” recordings here, wait until you hear them tearing through you from an actual stage.

“Well, yeah. That’s kind of our thing,” says Ross, with an air of confidence. “Okay, the record’s cool. But wait until you see this live. It’s been so pent up after a year of going ‘Alright, when can we just run into the fuckin’ crowd? When can Cole hit someone with his guitar?’ I wanna kiss everyone I can. I wanna feel their sweaty arms against mine.”

In keeping with the activist streak displayed on tunes like “This Blue Mob” – a seething anti-police screed written in the wake of the George Floyd murder – and the “pink”-capitalism putdown “Plaque Protection,” Sham Family wants the shows to come in support of its debut to build “community” and smash barriers above and beyond the traditional DIY-punk sense of the word. These guys have friends who move in the worlds of hip-hop and electronic music, even K-pop, and they see no reason why all those genres and all those crowds can’t mingle at the same shows.

“When I moved to Toronto, I started going to a lot of DIY hip hop shows. The people that I was meeting weren’t “punks” per se, and weren’t into a lot of punk or guitar music. But still they were in the pit and stage diving, and everything was so familiar to the world I know, but in such a different scene,” says Ross. “We’ve got a lot of friends we’re working on collaborations with and our vision is not to pinpoint genres but the emotion of the music. At the end of the day, genre is dead.”

“It’s the energy, the lyrical content,” concurs Sefton. “Half the shit we try to write about is the same shit a lot of hip-hop artists are rapping about. We come from similar worlds. We come from angry, misunderstood, poor communities and these are ways of expression and communities that should come together and start doing shit together because it’s the same vibe. It’s the same energy.”

This takes us back to the name Sham Family, which has no limits or restrictions on membership. All are welcome in this family.

“It’s just always kind of felt like that. We’re not just a band,” says Ross. “At the end of the day, we’re all best friends. We’ve lived together forever – me and Jay have lived together since we were 18, on and off, and have been sleeping on each other’s couches since we were 12. So it’s a little bit of that, but it’s also about the community thing we’re talking about. If we have someone collaborating with us or onstage with us, then they’re just part of the Sham Family.” 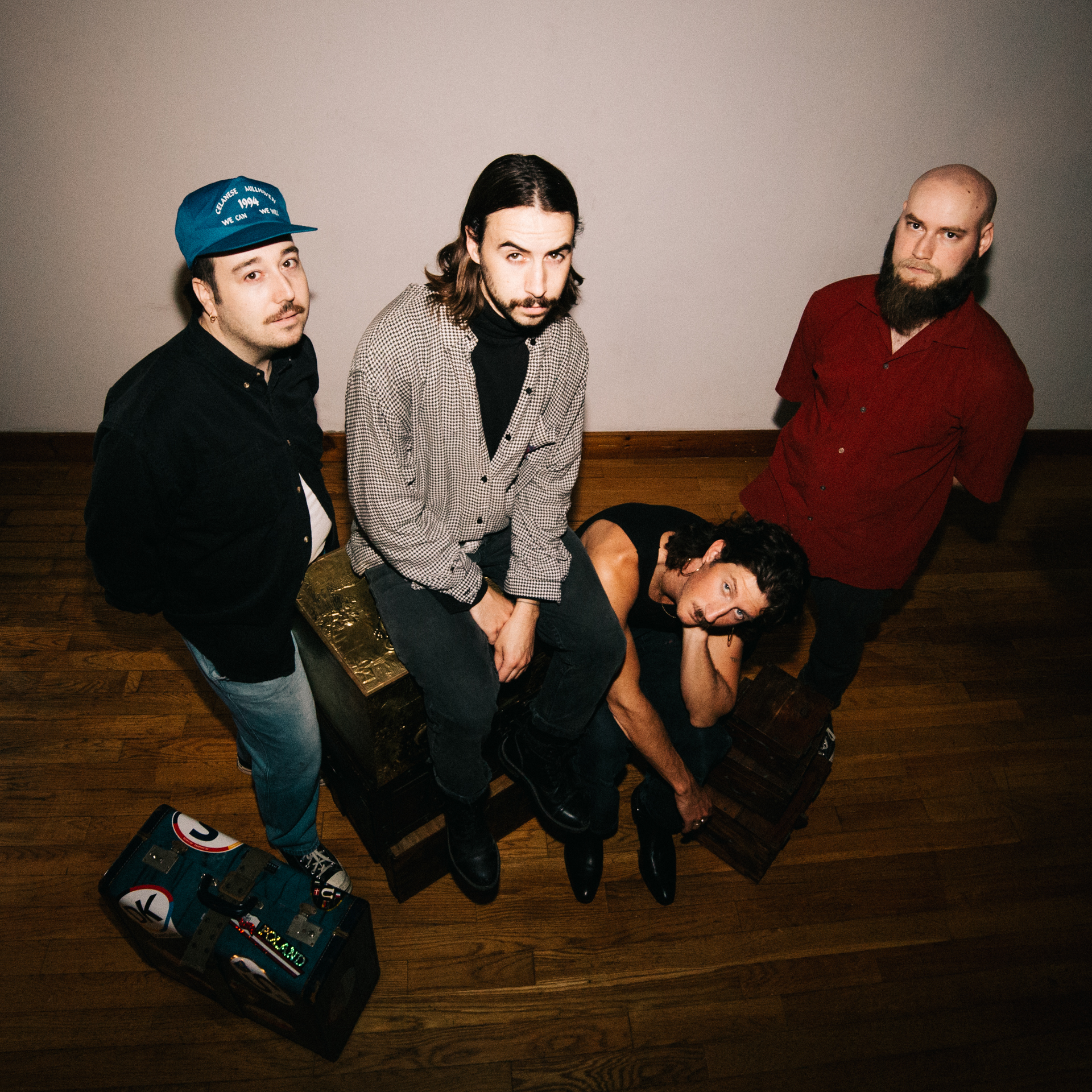